The ISS-ABOVE – your personal control center for the ISS!

Experience the amazing views of the astronauts on your own screen

The ISS-ABOVE shows live images from the ISS on your own screen, along with informative displays based on the screens in the ISS mission control center.

The initial basis for the live stream was the experiment “High-Definition Earth Viewing” (HDEV) with four external cameras which was installed on the International Space Station (ISS) in 2014. Since then, the live video stream has been available worldwide. In August 2019, NASA announced that the HDEV experiment was no longer functioning. But we were prepared!

In the background, we have continuously worked on the capabilities of ISS-ABOVE so that we can continue to offer alternative video feeds. For example, we are currently switching between ISS Live, NASA TV and recorded video sequences, so that the ISS-ABOVE has actually become more diverse and impressive. We usually show the ISS Live Feed, which continues to show real-time views of the Earth, but also switches to other ISS cameras (inside and outside) from time to time.

Due to the great success of HDEV, NASA has already announced that new or other HD camera views will be made permanently available, which we will of course include immediately. In addition, you can already now push selected videos from the configuration area of the ISS-ABOVE to your screen with a simple mouse click.

Parts of the ISS, such as the docked Russian Soyuz and Progress vehicles, can also be seen on the camera views. Sometimes you can also watch the approach and docking of spacecraft such as SpaceX’s Dragon capsule or Orbital ATK’s Cygnus spacecraft live.

ISS-ABOVE brings all these views to your screen, whether at home, at work, in the company’s reception or waiting area, or at your children’s school. The fascination of space travel can thus be conveyed impressively. 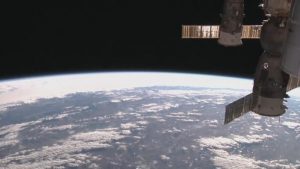 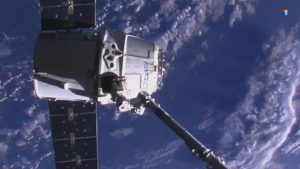 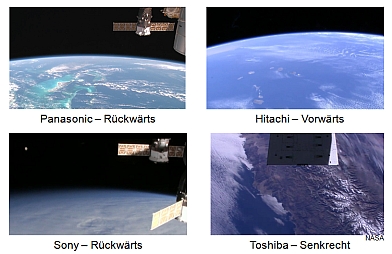 Follow the ISS and learn when you can see it

The ISS-ABOVE combines the live views with informative displays about the space station and how to watch the ISS in the sky. All the ISS-ABOVE needs is the information about your own position on Earth and an internet connection. You enter your own position at the first start of the ISS-ABOVE, and of course you can change it at any time. Many other settings can also be configured as an administrator of an ISS-ABOVE, e.g. the display time of the various info screens and the live stream, the display language and own tweets when the ISS moves across your sky.

The ISS-ABOVE shows the current position of the ISS above the Earth, along with useful information about the altitude and speed of the space station. In addition, the ISS-ABOVE also displays the current crew of the ISS with names, functions and image. Based on your location and the ISS trajectory, the ISS-ABOVE can also tell you when the ISS flies over your head for the next time and when you can observe it due to the reflected sunlight. This is usually the case in the evening or early morning, as the sun is too bright during the day and the lighting angles often do not fit during the night. The individual views of the ISS-ABOVE are explained in more detail below.

In addition, the flashing PiGlow module of the ISS-ABOVE shows you the next pass of the space station even without a screen. The LEDs show you through:

The individual screens of the ISS-ABOVE

The ISS-ABOVE is a standalone unit based on a Raspberry Pi. The Raspberry Pi is complemented by a PiGlow module to signal the ISS pass even without a screen. The ISS-ABOVE was developed by Liam Kennedy in the USA, we are the official reseller of the ISS-ABOVE in Europe, providing units assembled in and distributed directly from Europe.

If you are in North America (USA, Canada, Mexico) and interested in purchasing an ISS-ABOVE, please visit the US site at www.issabove.com.